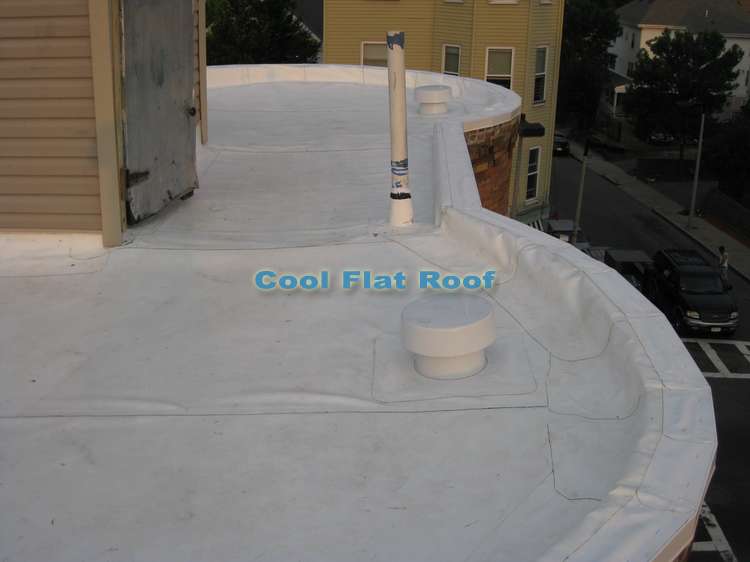 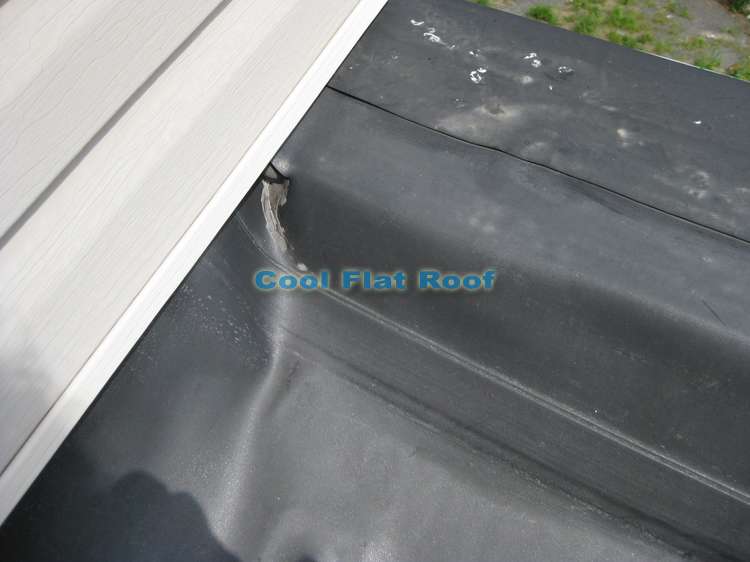 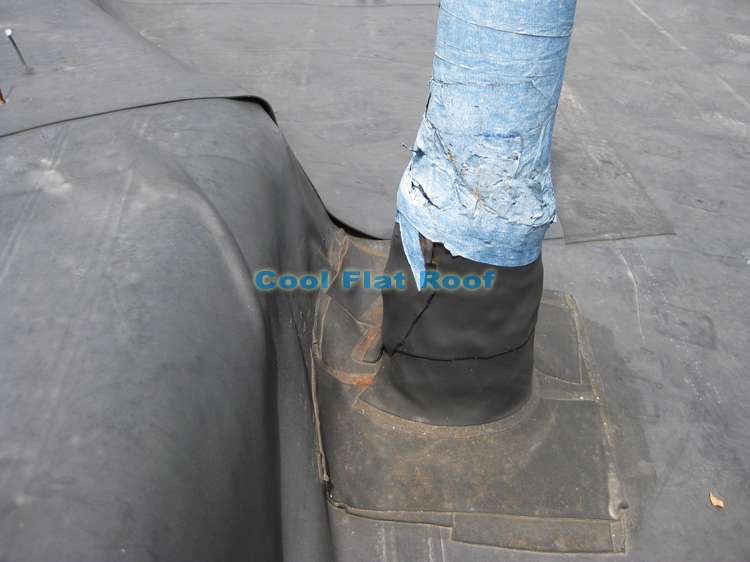 Just as a side note, this house used to be a part of a larger building, which was partially demolished at some point in time. Its current back wall used to be a separation firewall between different sections of the building. You can easily figure this out by looking at the brick on the front and back of the house. This brings up a mystery which I cannot solve: the through-wall drain is located in the back of the house, where the old separation wall is now. Therefore, back when the house was bigger, all the water would flow to the adjacent section of the roof. Still it had to drain somewhere, otherwise the house would be completely flooded, and the roof could have actually collapsed under all that weight. I suppose there were through-roof drains, which were buried / removed during one of the re-roofs and a through-wall drain was created when the rear part of the building was removed. I will come back to this topic later on, when I’ll discuss the parapet walls on this house.

This was actually a very small roof (just over 400 sq. ft), which however took us more than 7 working days to complete. Most of this time was spent on preparation work and many repairs we had to perform, before the new 80-mil IB PVC flat roof membrane would go on. All these repairs had to be performed while maintaining water-tightness. Using tarps would be nearly impossible and time consuming to put up, because of the roof’s shape. The roof had two round towers on the front, a “head-house” or a stairs walk out that lead to the roof in the center and parapet walls all around. In addition to all the given obstacles, to perform a quality installation, we had to remove all siding and the door off the head house, and then put it all back together when the job was complete. 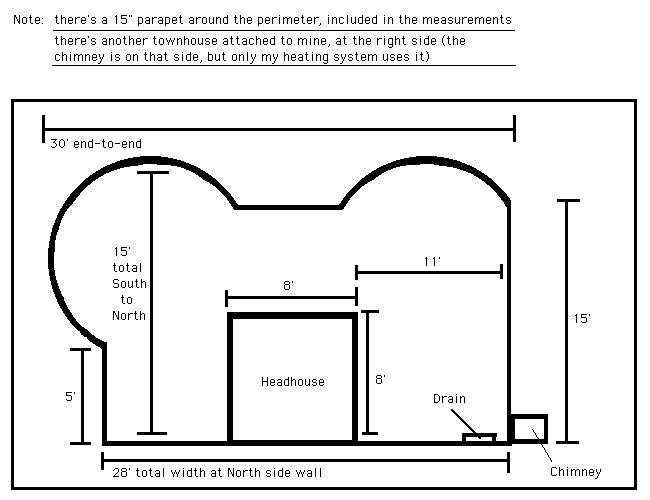 The first day was more like a test run, and we got rained out in the middle of the day. We started out the installation by removing the drip edge from the parapet walls and pulling back the rubber membrane to expose parapet walls. The reason for not just cutting rubber at the base of the roof and actually pulling it back was discussed earlier – we had to keep the roof watertight, when we left for the night. By maintaining the old rubber intact, we could simply put back the flaps and attach them back to parapets, until we came back the next day. We also planned to install a 2×8 pressure treated (PT) wood nailer over the parapet walls, by attaching them with masonry anchors, and Liquid Nails adhesive (for additional rigidity). To our disappointment, the bricks were completely loose over the entire length of the parapet wall. The old mortar fell apart, damaged by age, moisture and other weather-related factors.

The next day (Monday) we were back on the job site, and continued to work on the parapet wall repair. 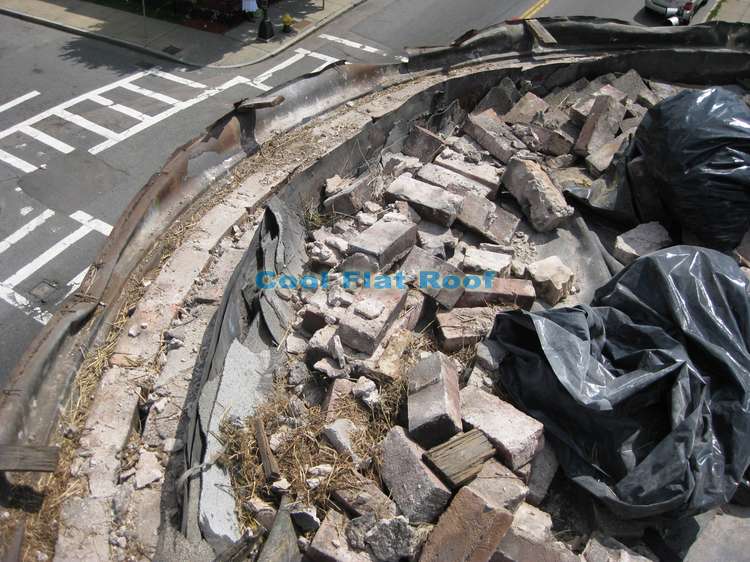 As we dug deeper, it turned out that we had to replace at least 3 rows of brick mortar. We could not go any lower, as that would create a potentially disastrous situation with the old casted metal moldings installed on the outside of the parapets. These metal moldings were held in place by nails inserted into the brick joints. If we would remove another row of bricks, the metal would just come loose and fall to the ground in one piece. Fortunately, as we dug deeper, the strength of mortar improved and we did not have to go down any more. Once the old brick was removed and old mortar, dirt / dust and other loose debris were vacuumed out, we could begin putting new mortar and bricks back. We had to wash and wire brush every brick, before it was laid back into the parapet wall. If you ask why not use new bricks – the answer is very simple. The new bricks that you get from the Home Depot or Lowe’s are junk. I could break one apart with my hands. The old bricks were of exceptional quality and strength, and were solid brick (no cavities) which allowed us to securely attach masonry anchors later on in the roof installation. 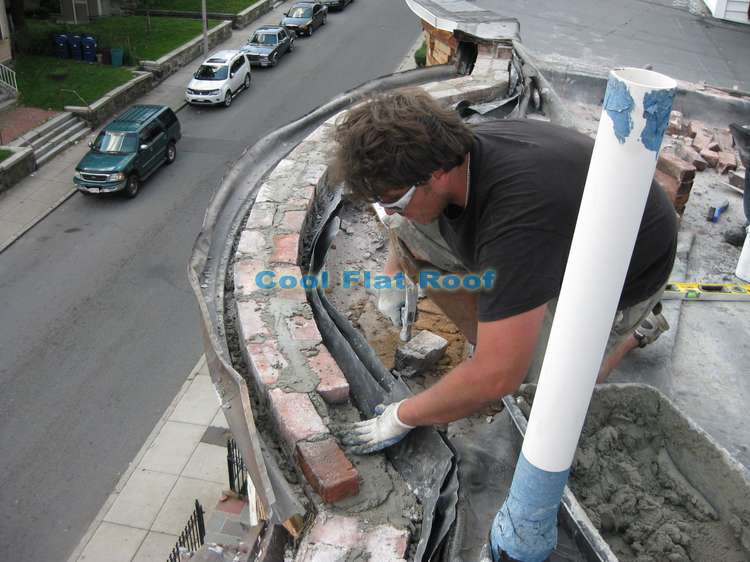 While maintaining rubber roof integrity, we replaced / repaired the top 3 rows of brick parapet walls and performed all other prep work, while getting ready for the big push – complete removal of all rubber roofing, and laying a new 80-mil IB PVC flat roofing system. The entire process had to be done in one day, so everything had to be ready. We removed the old metal flashing, installed all wood nailer boards, membrane over parapet walls and drip edge before tearing off the old membrane. Now, the roof was ready. 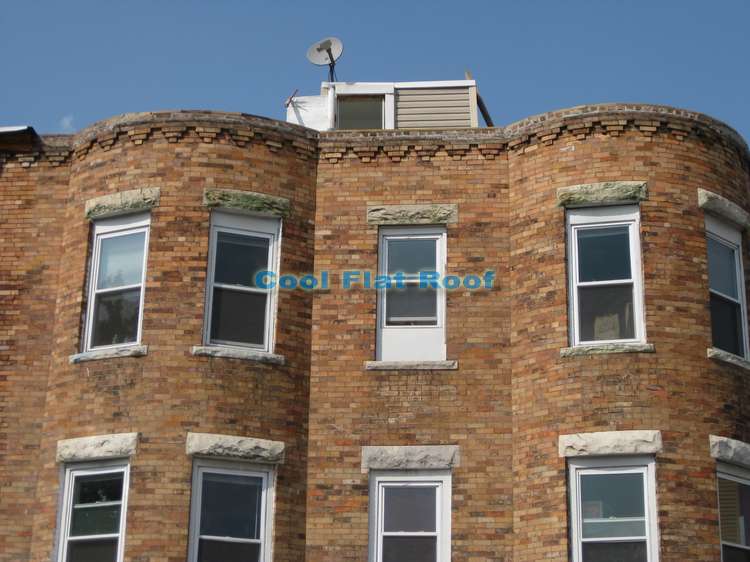 At the end of day 5 we took down all the metal coping off the outside of the parapet walls. At this point it was dangerously hanging, nailed through the brick joints. One person would stand on the ground, making sure there were no pedestrians walking near the house, while I was cutting the metal coping and taking it down in small sections. When all the metal was successfully removed, I was no longer worried that it may fall off on its own. Although we attached it to the rubber membrane overnight with no chance of becoming loose, I still could not wait until the metal was completely removed.

Once everything was prepared, the actual roof installation took two days. First we laid down and mechanically attached the entire membrane. All field seams were welded before any flashing work began. Once the main membrane was installed, we flipped down all the membrane that was already installed on parapets and welded it down to the main roof. Then the roof to wall flashing on the head house was installed. It was now time to flash the chimney, and at the same time make a new through-wall drain liner, so the water would run off the roof into the gutter, which we later installed along the back wall of the house.

At the end of day 7, all roof flashing was welded together, roof attic vents and membrane vents installed, the door was put back on the roof entrance and everything was watertight. All we had to do now was to come back one more time to install the new commercial 6″ gutter and 4×3″ downspouts.

Although this roof took twice as long as originally planned, we had enough time to fix everything and get it ready. Now, it would perform flawlessly, protecting this house from water and reducing the inside temperatures in the summer, thanks to roof’s cool white surface.

Here is what Jim (the homeowner) had to say:

I’m writing to pass on my thanks. The new IB roof is a vast improvement over the poorly installed rubber one that preceded it. It was also a great idea to swap in some of the heavier IB for the main floor area. I can tell how solid and rugged it is.

I can also confirm that it’s working, believe it or not. There was a section of wall in the upstairs hallway which had gotten damp, to the point that paint had begun to peel there. I’m likely going to replace the sheet-rock at that spot anyway, to be safe. But it is now bone-dry! We’ll see how it goes, but it seems to be off to a promising start.

I much appreciate the thoroughness and quality of your workmanship, and that of your crew.

All the Best,
Jim